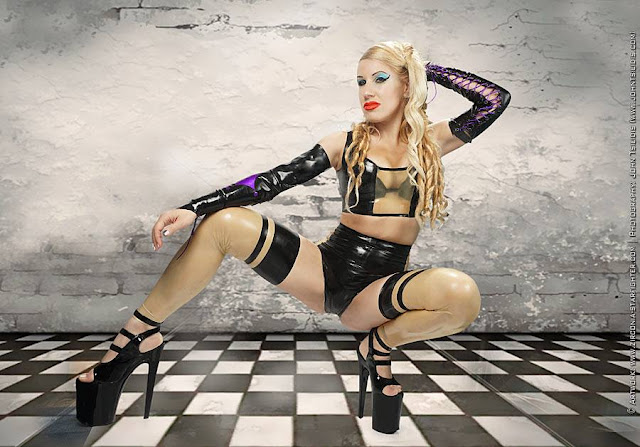 It's an enormous honor and pleasure to bring you an exclusive interview with the amazing Zirconia Starfighter, a loyal ally and dear friend of this blog whose work we follow with admiration. I hope you will find it as interesting and insightful as I did.

2015 was a difficult year for me but, to be honest, 2012 to 2014 I think was way worse than 2015. I know that’s not the most positive answer to give at an interview but, I’d like to be honest and clear. I believe my best moments were some amazing themed parties (such as Spank & Parko Loco etc.) and photo-shootings I had last year, plus, new connections, new interesting people to meet and, a new relationship. 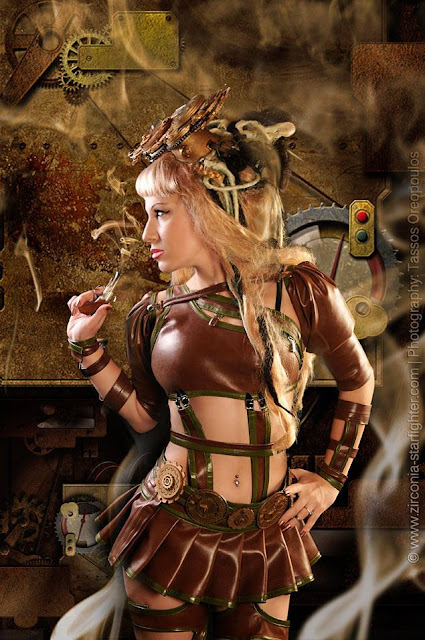 Her influences and interests include Japanese culture and steampunk.

2) What are your plans for 2016? Can you tell us about new projects? Personally I am looking forward to see pictures from your collaboration with Goddess Hiliana.

We made few pictures with my awesome friend Goddess Hiliana by CR-BO –her personal photographer & mentor- and Kimon K. who is a well known dj as well, in Mykonos, Athens and other places. We had found this amazing place, Ghost House Club in Athens along with Hiliana, to do some different concepts that day. So, her poses and outfits were totally fetish in latex and vinyl textures, while my clothes and concept were mostly in gothic style. However, we both had our photo-sets separately and later we made some few shots together. I present you here some results from our test collaboration and we hope to make some fetish concept in the future. Any other plans for this year I wouldn’t like to present them during our interview because, we are living a constantly changing situation so, plans may change whether we like it or not. I prefer to reveal you –like always- that I will try my best regarding my creativity to offer some interesting projects. Zirconia Starfighter and Goddess Hiliana, an awesome team up in a magical place.

3) Which are the major influences in your many facets (graphic designer, go-go dancer, model...)? As a blog devoted to pop culture, we'd like to know your favorite works.

As a graphic designer I am mainly influenced by any images which pass through my eyes on a daily basis. The thing with graphic design is that, when we started studying & practicing it as students, we had the motto «art for art». After my graduation, I faced the raw reality of the market which doesn’t let you express yourself that much, regarding creativity and imagination. So, I’d rather say that my influences vary as they’re mainly based on daily images I see around me, art, nature, technology, fairy tales, anime/manga etc. combined with my own imagination. I also use these influences I referred to, on my go-go dancing appearances, burlesque/cabaret shows, fire & sparkle performances in any occasion. Alternative, fetish, cyber, gothic, pinup projects are always included in my works. It’s quite difficult to name a personal favorite. 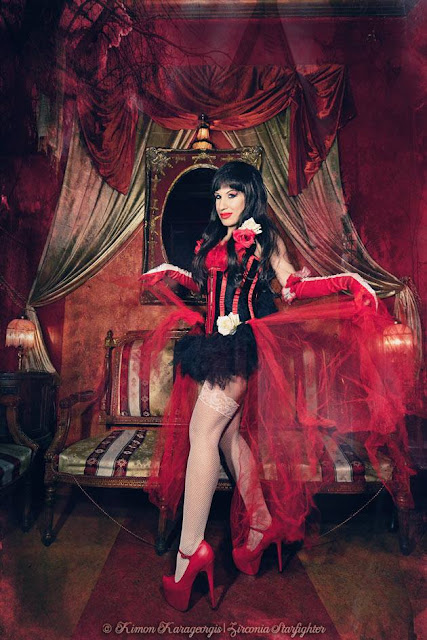 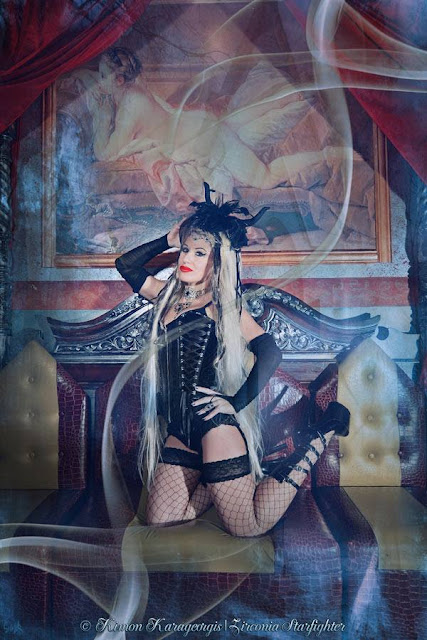 4) Zirconia Starfighter is a name inspired by the character Zirconia from Sailor Moon, have you ever done or thought about doing Cosplay?

I dressed some few times as a cosplayer in the past. I have created a Sailor Moon suit and still haven’t completed but, reached a good level at my Hatsune Miku cosplay. I love cosplay outfits and concepts. I adored manga & anime as a kid. Probably I will have a photo-shooting in the near future. 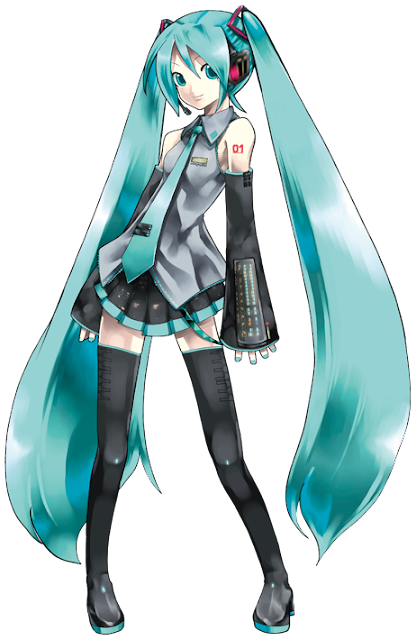 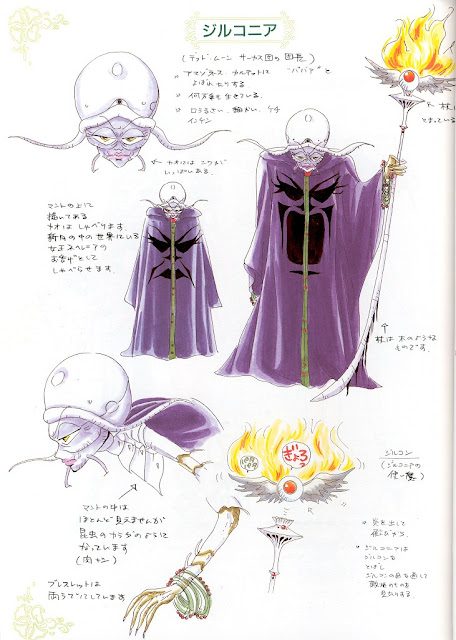 5) How did it feel to see yourself as a comic book character? What kind of stories would you like your character to star in?

It was not the first time I saw myself as a designed model. Elias Chatzoudis, the ultimate digital pinup artist, also designed me a longer time ago, as well as many other designers. But a complete comic book with a scenario and a whole story & plot was a real excitement for me. I told you when I saw myself as a comic heroine how grateful I was to you and how happy I was –and still am- about it. Words can’t describe my appreciation. As you might have noticed, most girls, during their childhood, admire their dolls with which they play, as well as comic and cartoon heroines who are always so beautiful, invulnerable and strong. Trying to look like a Barbie doll or a sexy cartoon model will be always the one and only challenge of a little girl while growing up. So, imagine how wonderful is the feeling to be the inspirational person yourself; the epitome of perfection! I owe this to you and to your amazingly creative ideas but, also to your insight and kindness. Thank you so much! To be honest, I don’t mind about the story and plot I am gonna be involved in the comic book, as long as it’s very close to my fictional character’s name «Zirconia Starfighter». As long as my heroine is a fair fighter, a hard worker and warrior, the rest is ok from me because I trust you. I have some few basic hopes that she’s going to save the world one day which I know it sounds big but still, that would be the best for the planet. World Peace is a common dream I believe. And don’t forget that my real Greek name means «peace». 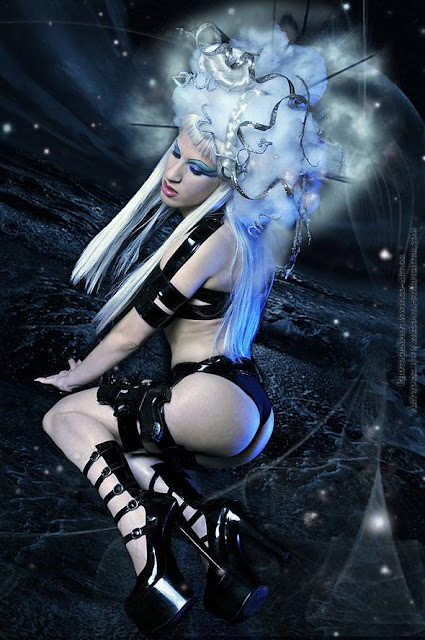 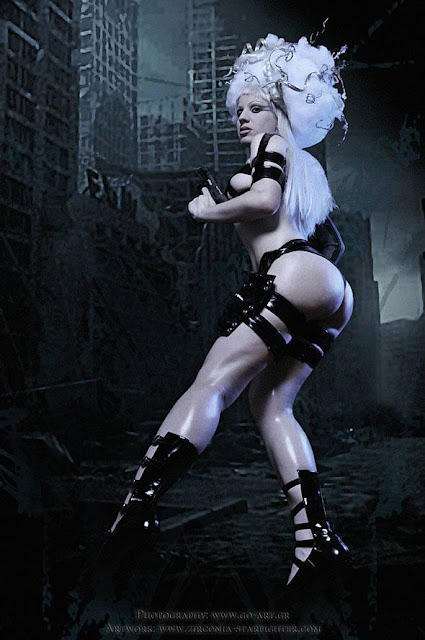 The look her comic book character is based upon, one of her finest photoshoots.

6) Another theme very dear to this blog is aliens and their influence, what's your opinion? Are we alone in the universe?

A thing you didn’t know about me is that I don’t simply watch sci-fi movies with alien themes; I also love watching movies about NASA, spacecrafts and various kinds of space travels. We live on a small planet in a vast galaxy. I know that while we may not be able to communicate with our «neighbors», we cannot prove anything yet scientifically and with any practical importance. I do believe there must be life somewhere out there. Besides it sounds too arrogant and selfish if we believe we’re the only living creatures in the universe. 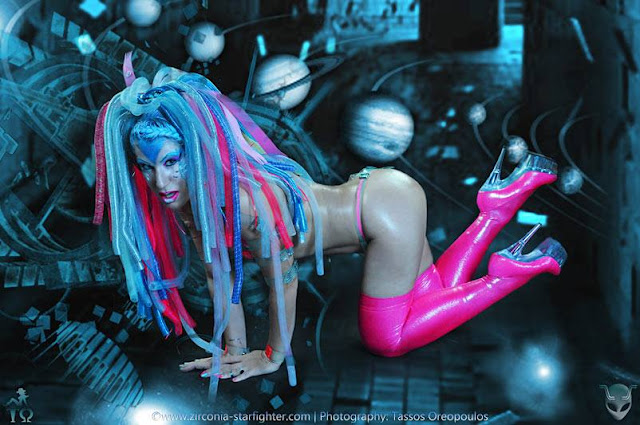 We are not alone

7) What do you think about the current situations with the refugee crisis when we are still dealing with the economic one? In Spain, Greece is seen as a reference, as we are going through similar political changes with Podemos playing the role of Syriza.

Greeks main fault was that they never studied political history so much; neither had they cared about politics or politicians. This huge ignorance resulted to frivolous votes and despicable developments. I believe it’s not of a great importance what I personally think about that terrible situation. I dislike sounding pessimistic but I am logical as well. Things will get only worse in my country. But I promise to try my best to remain an optimistic fighter, standing up for myself, my hopes, dreams and vision. 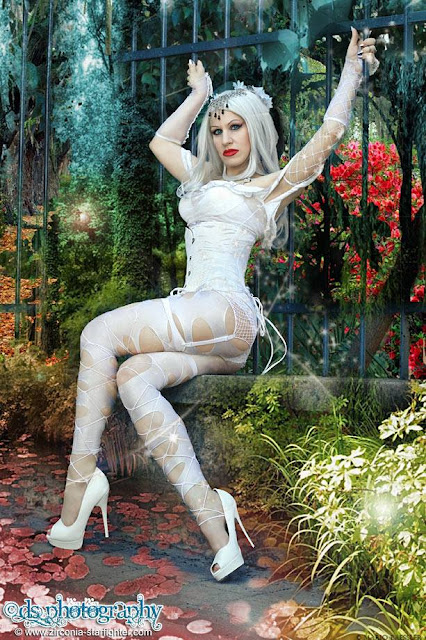 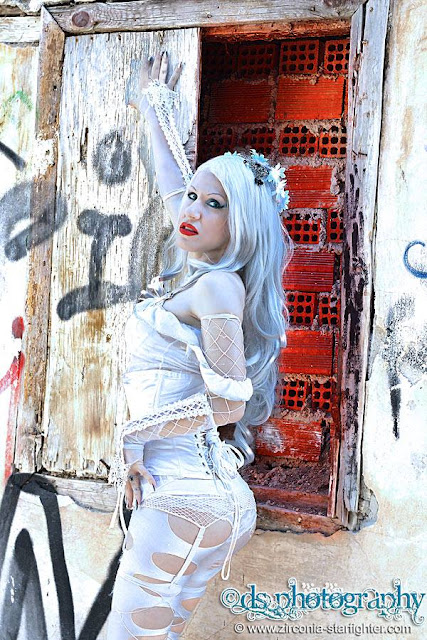 You can follow and support Zirconia Starfighter in the following links: