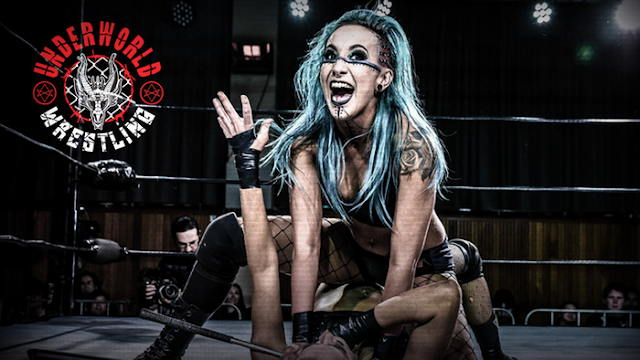 As all readers of this blog already know, Pop Culture is the best key to unlock the Truth. Unlike historians and scientists, artists have freedom to tinker with ideas that are written in our very DNA and see where they may lead. Their works, no matter how outrageous or outlandish they look are always closer to reality than the censored version we have been taught by the official institutions, all controlled by the Evil and decaying Academy. As a veteran challenger of the unknown, I, Patrick Von Steiner, am always looking for new and old works of Pop Culture that may enrich our understanding of reality. Thanks to the video streaming service of Amazon, I have recently discovered a genuine gem of Pop Culture made in Australia, Underworld Wrestling, that exposes a very old and secret competition and a conspiracy to end the world. Not a small feat, don't you think?


Underworld Wrestling will be secret no more!

Financed by a crowdfunding campaign, Underworld Wrestling is about an underground wrestling competition in Australia, that for the fist time in its long history, opens its doors and becomes a public event. Why the change? Easy. The competition has been taken over by a group called the Claw, led by ‘Lord’ Mark Williamson. Although not much is known about this cult, rumors say that they need to win the Two Underworld Championships ( Male and Female) of this ancient competition to acquire a great power they may use to end the world. The already got one of them, so they only need the other one and keep theirs. Thankfully, not all fighters are in league with The Claw, and will try their best to keep them from getting both Championships.


The first episode of this epic saga

I suppose you, my dear reader, have many questions. As I do. Is this nefarious Claw connected to any of our enemies, be it the Academy, the Grey or the cyber criminal network known as Elysium? Has ‘Lord’ Mark Williamson ever been a member of the Academy? Is this sinister cult inspired or related to Panther Claw, the evil group that the Japanese superhero Cutie Honey fights against? We don't know. All we are sure is that it's in our best interest that ‘Lord’ Mark Williamson may never achieve his goal. We love this planet too much to let it end at his hands. We will keep an eye on his evil plans, and you can too, just check the following links, where you can learn more about this underground competition. A source of pride and shame at the same time in Australia.