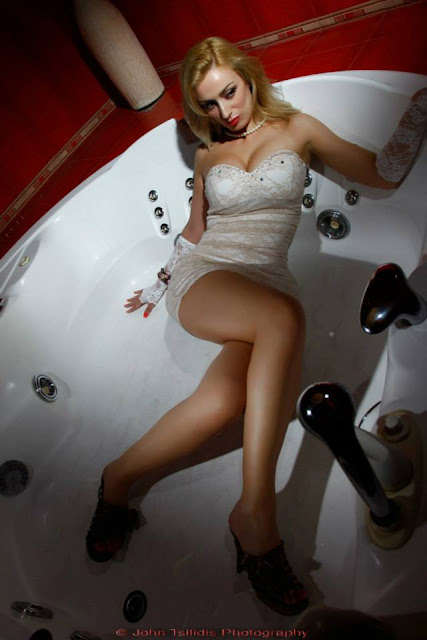 The noise was not human and sounded like something from the movies she starred in. She picked her gun, a small and reliable weapon she always carried with her. As she entered the bathroom, she saw the origin of the noise, it was a being made of liquid, shining and twisting inside the bath. She had no idea of what to do. As she kept pointing her gun at the creature, it started to change its shape and texture very fast. No more than a minute later, Sarah Devlin was looking at a exact replica of herself. She was totally freaked out. Deciding that shooting that thing or questioning it would be pointless, she ran away but she couldn't get very far as the door of her room was blocked. She screamed as she could hear her copy approaching. A voice from outside told her to step aside. She did and next thing the door was down and a the detective was inside her room.


"Are you okay?" He asked. She pointed at the incoming inhuman copy and answered with another question, "what the hell is that thing?" He only had to take a brief look at Sarah and the creature to figure out it was serious business. "Problems, big problems. We must get out, now". Without looking back, they ran away. They didn't notice the manager as they got to the hotel's hall, but he did and smiled. As they got to the street, he gave orders to give proper attention to the new guest. His employees knew exactly what that meant. One of them went to the kitchen and picked red meat, while the other prepared a combination of fruit juice and whisky. The welcoming ritual had to be performed so the creature could establish itself as a viable living being.


When Sarah and the detective, whose name she ignored, stopped running, she noticed they were holding hands. It was a bit weird for her to trust a complete stranger, and the she realised she had seen his face before. It took her a while to figure out where. They were sitting in a bar and he was asking for some coffee, when she said: "You are that western writer, Walter Faraday, my sister introduced us at a party". He smiled. "I am a detective too and I think we are working in the same case." "What is going on in that hotel?" "Your sister is not the first person to go missing after renting a room there, but the first to be notices. They are usually people without family or friends in the area who come looking for an opportunity in Hollywood. Your sister suspected the Hotel was linked to a cult and wanted to write a book to expose the Truth. I tried to convince her to let me handle the investigation but you know her. And now she is missing." That information was more than what she had got from either the press or the manager. "Now we know for a fact that something is wrong there, the question is... what shall we do?" Faraday smiled. "Now we go to my apartment and prepare our return. I have a couple of ideas about the being from your room and what its purpose may be."

To be continued in...Part IV